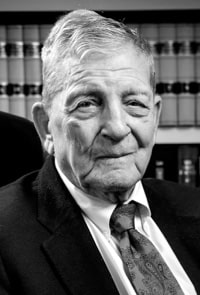 Philip Auerbach attended and graduated from Ohio State University, where he was a member of the football and wrestling teams. He also boxed in two consecutive years of Golden Gloves of America tournaments. After college, he volunteered for the United States Army, and was honorably discharged for his service. He then continued on to attend the University of Pennsylvania Law School on a full scholarship, where he was on Law Review and graduated with honors.

Since 1960, Mr. Auerbach has been passionately involved in litigation, both in criminal and civil matters. In the earlier years of his litigation, he tried many criminal cases, including a number of murder trials. Phil has tried over 150 civil cases to their completion, obtaining many million-dollar verdicts and settlements, in cases where the defense originally offered little to no compensation. Over the past years, Phil’s loyalty to honest methods has obtained many groundbreaking results in the courtroom.

A few of Mr. Auerbach’s civil cases have served as litigation touchstones, breaking norms and setting new standards. For example, in Pierson v. Frederickson, he tried the first case in the nation in which a witness could testify to the speed of a vehicle, based solely on sounds he heard. In Bennett v. T&T Distributing, Mr. Auerbach presented the first case in which NJ recognized and applied “negligence in hiring,” to a distributor. He also had one the leading cases in “Public Entity Law”, with his work on McGowen v. Borough of Eatontown.

A History Of Fighting For Clients

Mr. Auerbach has contributed greatly to the legal community, not only through his work in the courtroom, but also in the classroom. He and another attorney were the first two lawyers in the state of NJ chosen to teach trial lawyers in NJ trial techniques. Mr. Auerbach wrote a book entitled “Try It”, and designed a Skill and Methods course, the completion of which was required for the admission to the NJ State Bar. He has taught “trial techniques” and “methods” at law schools and colleges across the nation, including Rutgers Law School, Institute for Continuing Legal Education, Mississippi University, University of New Mexico, Michigan University, University of Tennessee, and Willamette University.

At one time Mr. Auerbach taught trial skills and lectured alongside many influential members of the legal community, such as the Chief Judge of the US Court of Appeals for the 7th circuit, and the lead trial attorney in Pacific Gas and Electric class action, the famed case Erin Brockovich worked on. Phil’s mentorship transcends his time in the classroom. During his career he has established on ongoing legacy in founding organizations, such as the Trial Attorneys of New Jersey, a state trial organization still influential in New Jersey legal affairs today, as well as the Monmouth County Inns of Court, an organization which continues to teach local lawyers trial skills.

Over the course of Mr. Auerbach’s successful career, he has been recognized in many different capacities, such as the TANJ award for trial excellence, and the Clapp award for teaching. Over time, he was also appointed many prestigious titles such as, “One of The 10 Best Civil Trial Lawyers in New Jersey, named by the National Law Journal, Lawyer of the Year by the New Jersey Bar Association, and was once listed in the “Who’s Who in American Law” and “Who’s Who in America.”

Mr. Auerbach is, and has always been, a caring and involved member of the legal and local community. At this point in Mr. Auerbach’s career, he continues to do work with the Inns of Court and TANJ. Currently, Mr. Auerbach is “Of Counsel” at the firm of Shebell & Shebell, LLC, where he continues to inspire by offering his valuable insight, advising and working with the determined trial attorneys of Shebell and Shebell, LLC.