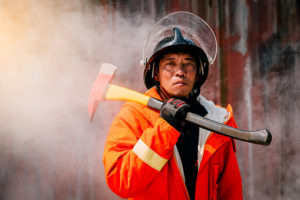 It's been nearly two decades since we, as a nation, experienced the horrific acts of terror committed on September 11, 2001. In the days that followed 9/11, many firefighters and emergency personnel were the first to trudge through the rubble of the World Trade Center — searching for potential survivors.

These heroes put their lives and health on the line to serve the public and their country. But years after their service, not enough has been done to protect these brave men and women. Sadly, many state lawmakers have been lagging behind.

According to the New York Post, nearly 10,000 people have suffered from cancer due to exposure to toxic smoke and dust, many of whom were first responders. This has resulted in more than 1,700 deaths, including 420 that were cancer-related.

What's worse, many first responders who are alive today are at a heightened risk of developing heart disease, according to a study published in the Journal of the American Medical Association.

Recently, the state of New Jersey has taken the initiative to provide adequate compensation for 9/11 first responders who have suffered adverse health conditions as a result of their service.

A bill called the "Thomas P. Canzanella Twenty First Century First Responders Protection Act" (S716) was introduced in 2018 and sponsored by Senators Linda R. Greenstein and Christopher "Kip" Bateman. It was named after former Hackensack firefighter Deputy Chief Thomas P. Canzanella, who served at Ground Zero after 9/11 and died at the age of 50 due to a heart attack.

The bill, which supplemented chapter 15 of Title 34, was devised for the following purposes:

Another bill called the "Bill Ricci World Trade Center Rescue, Recovery, and Cleanup Operations Act" (NJ A4882) was introduced in January of 2019 and was sponsored by 27 state lawmakers. It was named after Clifton firefighter Lieutenant Bill Ricci, who served at Ground Zero after 9/11 and was previously uneligible to receive benefits.

The bill asserts the following:

This past summer, Governor Phil Murphy signed both A4882 and S716 into law. Previously, New Jersey first responders and firefighters had to expend time and resources proving their health conditions, injuries, or illnesses. Under New Jersey's recent workers' compensation rebuttals, firefighters with seven or more years of service are eligible for benefits without the burden of proof.

Other public safety workers can also be eligible for benefits without having to prove their condition. They must, however, prove that they were exposed to harmful substances while within the scope of their duties.

The workers' compensation attorneys at Shebell & Shebell, LLC applaud the sacrifices made by our public safety workers and the actions of our state lawmakers.

We handle a wide range of workers' compensation and disability claims, including:

If you're a firefighter, police officer, or other public safety worker who has sustained an illness, injury, or adverse health condition on the job, our legal team would like to sit down with you and discuss your legal options. Our law offices are based in Shrewsbury and Freehold. To schedule your free initial consultation with one of our attorneys, contact us online today.